He is set to retire in October after 42 years with the firm. 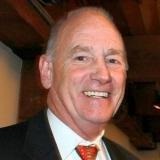 It’s been a while in coming, according to Don Kurth, owner and partner of HAGEN, KURTH, PERMAN & Co., P.S. (HKP), when talking about his upcoming retirement after 42 years with the firm.

The path to becoming an accountant had a few twists and turns for Kurth. Growing up, he always knew that he wanted to go to college and do something associated with business. He enrolled in the general studies program at Washington State University and afterward served in the military as a fireman. Kurth told us, “Looking back at my classes, I really liked my basic accounting studies and tax classes, so I decided to go back and do that. There was one other reason why I did it; I was having a terrible time passing the verbal part of my Spanish courses and I didn’t think I was ever going to [pass] that. With the accounting degree, I didn’t have to have a [foreign language requirement].” After Kurth received his degree, he briefly went to work for a bank where he was asked to interview for the tax position in the Trust Department. He really liked his new job and decided to sit for the CPA exam. Kurth said, “I was there for three years and then went to work for Peat Marwick’s (now KPMG) Tax Department for five years, afterwards I left and started from scratch an accounting firm with another CPA. He was our auditor and I was the tax person. We ended up being successful from day one.”

Kurth is now very appreciative and aware of his firm’s accomplishments. He said, “We also did not know how fortunate we were because most accounting firms have a hard time making it through the first year, and most don’t make it past their first five years. This is now our 42nd year [in business] and my 50th tax season, and I’ve liked it!”

Kurth became lead owner of HKP in 1995 but in looking forward to his eventual retirement, his main objective turned to making it so the firm would survive. He said, “About nine years ago, we started a leadership program for the owners to get them to realize what it takes to be a leader instead of just a manager. That worked out well. A Crowe Horwath U.S. firm really helped us out a lot – by attending their international meetings, I realized how well Crowe had done in their succession process and in getting owners to take a leading position.”

HKP experienced some hurdles along the way. Kurth explained, “A major milestone was realizing that we needed some help in regards to getting new business. One of the things we did [as owners] was we made sure we prayed for it.” They also took a critical look at how to make their firm run smoothly, “About five years in, we realized that partnership was not fitting us very well because everyone wanted to be involved in all the decisions. We became a C corporation; we had a president and all the owners were part of the board. The lead owner, who was the president, had responsibility for leading the company and all the owners had responsibility for dealing with the clients and dealing with employees,” he said.

These decisions paved the way to the firm’s success. Kurth also added, “Prayer has been a big part of it and having a supportive wife has been a big item. Staying focused [on and pro­ active for our clients],” is another key.

“What the clients are looking for from their accountants really hasn’t changed. They still want quality work and for us to be proactive and look out for them. That’s never changed… the biggest changes have been the different ways you can communicate with clients and the speed they expect you to communicate with them.”

We asked Kurth what issue is most important to HKP’s future. He said, “The main thing is your equity owners need to be owners that really fit the needs of the firm and that you don’t have more than what your income can support. Also, the owners need to be willing to take leadership positions and not just be good managers and good client people. A leader is definitely different than a manager because a leader is looking into the future and not just solving what’s going on at the moment.”

Kurth told us that CPAmerica was beneficial in giving him “the ability to see how to run our firm better and being able to look at how different firms operate… and have been successful and then being able to pick and choose what makes sense within our firm.”

Kurth feels like HKP is ready for the future. He said, “the firm is in a good position, [from the standpoint of] the owners willing to take on leadership. Phil Laube took over for me and is doing a great job as lead owner.”

He’s ready for retirement. Kurth said, “My wife and I enjoy spending time together and in the last three years, she’s really been ready for me to retire. We are going to move to the eastern Washington area (Grand Coulee) on Lake Roosevelt. I’m looking forward to getting tied up in that community.

We had the opportunity to speak with Don Kurth’s wife, Judy, about his upcoming retirement. Judy has been active in the association, too, and has actively supported Don through­ out his career. She retired in 1995 in order to be more available to her husband, and said, “As far as the deadlines go, I was prepared for April 15, but I was surprised when I learned that there was also September and October 15 deadlines … that was a real eye-opener for me … I told Don that after he retires, the words ‘hurry’ and ‘fast’. are not going to be in our vocabulary!

She attended many Crowe International and CPAmerica events and said that having guests at the meetings was very beneficial and that it was a good way of opening up doors to making new connections. “I have great friends because of that,” she said.

Retirement is “going to be a lot slower pace of life. I’m ready for it. Don and I are good partners in life. We work together well.”